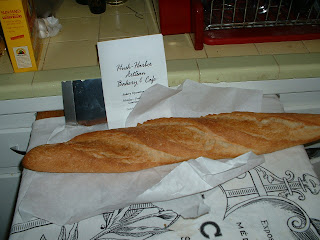 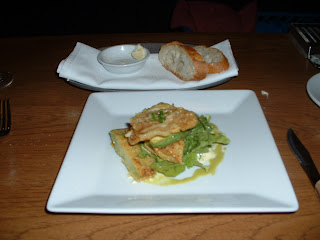 The night before leaving for home Pierino returned to another favorite local restaurant, Artisan at 14th and Park. We had two wonderful courses there, first was an abalone "BLTA" with pancetta, arugula and fried green tomatoes. We will let you figure out how the BLTA assembles itself. Unfortunately California's abalone fishery has long been done in, by the usual suspects. It's being farm raised in Cayucos but if you look for it outside of central California it's going to cost you.

Before our first course was served we tasted a really wonderful bread, which you can see pictured. We'll come back to the bread momentarily.

Second course was a duck confit with a winter chicory salad. Also delicious, with a local pinot.

Now the bread. We asked if it was made in house or purchased outside. As it turns out they get their baguettes from Hush-Harbor in Atascadero. Needless to say upon departure we checked in at Hush-Harbor in the morning as it was on the way home and easy to find. It's located in a strip mall but they make wonderful artisan breads. Is it worth driving 240 miles for a great baguette? We vote yes! 5735 El Camino Real, Atascadero, CA. Sorry friends, no website. You will have to check it out in person. At least it's a beautiful drive.

Posted by Pierino at 4:51 PM No comments: 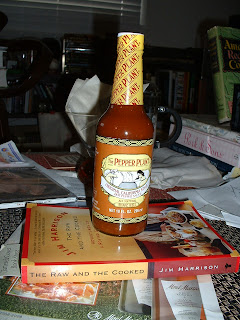 How often can you say good "hot sauce" after you've left the McIlhenny plantation on Avery Island? Most of the new "gourmet" hot sauces want to grab your attention (and test your intelligence) with names like "Set Your Balls on Fire" or "Flaming Commie Sikorskies from Hell" and they boast more Scoville units than Alaska has people. Okay maybe that's not such a big boast. Sarah Palin can probably
throw a bottle across the Bering Straits to curious Russians. They won't like the Sikorskies from Hell joke though.

Chipotle? In my opinion this is the most misused ingredient since balsamic vinegar. Thanks again, Bobby Flay.

So I'm happy to say I found a really nice one when I was having breakfast at Maggie's in Paso. Pepper Plant, made in Gilroy, CA. It has a very nice balance of heat to flavor. Great with my potatoes. There should be some real flavor in there besides that of spent nuclear rods. Pepper Plant, made with Jalapenos, delivers the flavor and just the right amount of heat.

Later that day I went out to search for it and actually found it on the shelf at Albertson's. It might be hard to find outside of Central California, but you can buy it directly from the producer on line. 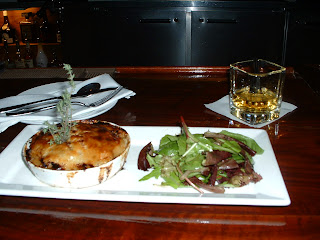 Pierino spent the beginning of this week in a town we love very much, Paso Robles. Shopped for olive oil, cheese and real estate.

We arrived Sunday and for dinner made a bee line for Villa Creek. We blogged this place back in September and it remains among our favorites. The weather in Paso is turning cold at night and Pierino didn't pack enough warm stuff because at times he's the absent minded professor. They make a great cassoulet but on this night we went with their delicious chicken pot pie.

Tuesday we had lunch at Buona Tavola, a very good Italian place which began it's life in San Luis Obispo at least fifteen years ago. Now they have an outpost in Paso just off the town square. Our lunch was a delicious fettucine sugo di carne misti. Mixed meats. Wonderful.

What got us wondering was that at 1:30 Pierino was the only customer in the place. They run a typical lunch service from 11:30 to 2:00 but we had the sense that maybe nobody else had been in before us. How can you open for lunch for just one cover? 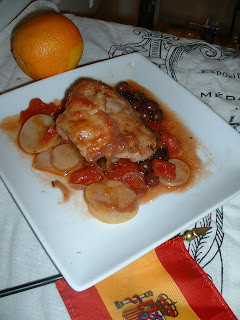 Back to the Zeitgeist. There are a couple of inside jokes in the name of this recipe. One of which is that “Walking Spanish” is the title of a Tom Waits song.

For this very easy recipe you will need chicken thighs including the skin and the bones. Don’t wimp out with skinless, boneless, taste free stuff aka chicken thighs light. This is a braised dish and you will need those bones. The other key ingredient is good Spanish pimento aka paprika. I prefer the ahumado meaning smoked. It’s easy to order on line from Tienda or The Spanish table.

In a dish or pie pan add the Wondra and pimenton and then with a fork mix together
Pat dry the chicken thighs and dredge them. Season with salt and set aside
In your dutch oven add the olive oil and heat over medium
When the oil begins to ripple a bit add the garlic first and then the onions long enough to give them some color.
Add the chicken thighs
Turn up the heat to medium high and brown the thighs two at a time and set aside.
Off heat spoon off most of the remaining oil and fat. And return to the burner.
Add the red wine and reduce by half using a spatula or wooden spoon to scrape up the good stuff off the bottom and then return the thighs to your dutch oven.
Add the tomatoes and bring to a simmer covered. Then add the olives and thyme .
After about ten minutes add the potatoes and recover.
Total cooking time is about 30 minutes but check with a knife or better yet an instant read thermometer. Season with salt and pepper and add the orange zest.
Taste and serve.

*A Kyocera adjustable ceramic slicer is great for this
Posted by Pierino at 11:45 AM No comments: 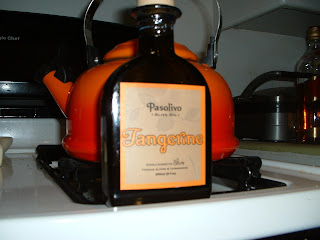 Pierino has been praising California cheeses and olive oils for years. Right now is a good time to seek these products out. New olive oils and seasonal cheeses are just coming on the market. However for some you may have to go to the source.

Cowgirl Creamery in Pt. Reyes makes wonderful camembert and epoisses with seasonal versions as well. Their bestsellers are the Mt. Tam and the Red Hawk. In Pierino's opinion the Red Hawk (an epoisses style) is their best. Their seasonal cheeses include Pt. Pierce with an herbed rind and St. Pat with nettles on the rind. All are delicious. Everytime I bring one to a dinner everyone raves about it. Cowgirl Creamery has an outlet in the Ferry Building in San Francisco, but I've been able to find them at Whole Foods. And you can order online directly from the Cowgirls.

Another new favorite is Pozo Tomme from Riconada, a sheep ranch in Santa Margarita. Very limited production. Look for it at Di Raimondo in Paso Robles or contact Riconada directly. They are wonderful people.

Olive oil. In Pierino's opinion these can at least be the equal of imported European oils. Olive growers have been bringing in tree stock from Italy which has thrived on the Central Coast and in the Napa area. Now most of the small production oils are a blend.

Pasolivo tends to be consistant from year to year. They've introduced two infused oils; lemon and tangerine. See the picture above. You can buy Pasolivo from Zingerman's but not their infused oils.
Vineyard Canyon, also from Paso, is wildly inconstant and very small production. They only do a couple of styles which unfortunately they keep tweaking. At their best, when you first taste them you will feel the burn! However some years they smooth them out, apparently to appease the wimps among us. But I always look forward to their new oils.
BTW Paso has an Olive Festival in August---when the temperature is maybe 105 degrees F. But it's more fun than the midstate fair.
Posted by Pierino at 7:01 AM No comments:

Dinner for Four in Ojai

Pierino has a really good friend from college, now retired who lets him get eight hours of Ojai sleep in the guest bedroom. In exchange Pierino does all the cooking (except for making coffee) and occasionally donates one or two kitchen tools.

On the Saturday night after Halloween we had two good friends over dinner. For cooking away from home (far away from home) it's always best to stick to things that can be cooked competently. Never experiment with a new dish or technique without perfecting it. It doesn't matter how forgiving your friends might be. They are friends and need to be fed well to the best of your ability.

Cheese board: Mt. Tam from Cowgirl Creamery, Spanish Mahon, and Spanish membrillo (quince jelly). Both Cheeses were a hit so we were off to a good start.

Main course: roast chicken. Any good cook can handle this one, and in fact it's what many chef's love to cook at home. It's almost failure proof. Pierino used a 4 1/2 pound Rocky Junior, filled the cavity with a small amount of kosher salt, some rosemary branches and two lemons---pierced agressively with a small knife and then tied up the legs, reversed the wings and then rubbed it all over with olive and more kosher salt. Figure 20 minutes per pound at 375, keeping in mind that no two ovens are calibrated exactly the same. Pierino carries his trusty Thermapen to get accurate chicken meat temperatures in seconds. Once the chicken rests you are ready to go, go, go. Let the carving begin!

With no false modesty the host and his guests did everything but lick the carcass at the end.

Pierino's two favorite kitchen jobs are roasting chickens and making stocks and broths. Easy and rewarding. Try this at home with no fear.
Posted by Pierino at 11:40 AM No comments: