The food52 crowd was handed a throwdown by Cooks Illustrated: lab rats versus home cooks. Sweet. Mr Bowtie and starched apron, Chris Kimball at first tried to back out but got shamed into going through with it. Categories are "roast pork shoulder" and "sugar cookies". We'll kick butt (which in the language of pork is actually the shoulder---don't ask me why), and of course yours truly has entered with "Porchetta Pierino". Read all about it at www.food52.com By all means log in and comment. In the end this will all be decided by popular vote.

For those of you unfamiliar with Cooks Illustrated magazine, the whole format is to produce the "best" this or that. The flaw in that thinking is that your kitchen isn't the same as mine. Your oven could be calibrated 25 degrees hotter or less warm, your knife may not be as sharp, and maybe you are buying your "fresh" fish from the supermarket. Other than that the magazine is useful for showing you ways to multi-task your meat pounder. Doink!
Posted by Pierino at 6:40 AM 1 comment: 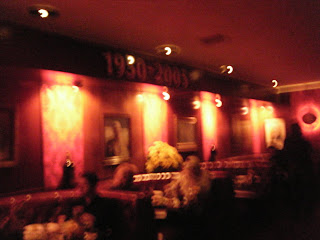 It's flat out effing scary in Arizona. A week back I was looking at the remnants of the umpteenth catastrophic car crash from my hotel window. They seem to lack three things in Arizona. Those would be red light recognition, brakes, and state funded rest stops. The latter is the newest ingredient in their particular and perverse fusion bomb.

So Pierino was encamped in Chandler (it works for business reasons). In Chandler dining establishments have names like "My Big Fat Greek Restaurant". Catch my drift? We could have done better by driving into the city where there are some good places, like Pizzeria Bianco but we finished each day too tired and too scared to travel more than a mile.

One find though was Durant's on Central Avenue in Phoenix. Pierino loves old school restaurant/bars even though he only drinks club soda in the daytime. We are used to dark bars, but this is really, really dark (hence the jittery lightscape in the image). So dark we could barely read the menu let alone our book. Opened in 1950, Durant's has that red velvet wall and banquette charm. We love these places. Phoenix now has light rail running down Central Avenue which solves to a degree the red light issue. The metro stops almost outside Durant's door at 2611 North Central. So we enjoyed a capable tuna salad with our obligatory club soda and squinted into the sunlight in the aftermath. For the record, the Pink Pony in Scottsdale is now closed.

We also visited our favorite bookstore in AZ. That would be Changing Hands in Tempe at Guadalupe and McClintock. We lunched with owner Gayle Shanks at Windy City Cafe and enjoyed real Chicago hot dogs. I mean these are authentic, dragged through the garden, right down to the poppy seed buns and bright green relish. If you've been to Chicago you know what I'm talking about. So if you visit Tempe be sure to buy a book at Changing Hands and a hot dog at Windy City, 1815 East Elliot Rd. Just don't drive through the yellow tape.
Posted by Pierino at 5:26 PM 2 comments: