Good morning everyone, yours truly aka Pierino, has an entry in Food 52's recipe contest at http://www.food52.com/home for "Walking Spanish Down the Hall Chicken Thighs" in "your best recipe using paprika."

Comment please. And vote early and often once the polls open.
Posted by Pierino at 10:19 AM 2 comments: 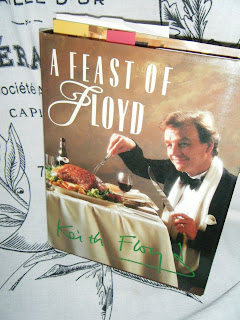 Pierino enjoyed Floyd shows much more than "The French Chef." Like Graham Kerr he didn't mind indulging in tipsy, bawdy humour but not with each spoken line incorporating the "F" word as an adjective.

To borrow from Jim Carroll we'll say, "Keith I miss you more than all the others, and I salute you brother!!"
Posted by Pierino at 8:09 AM No comments: 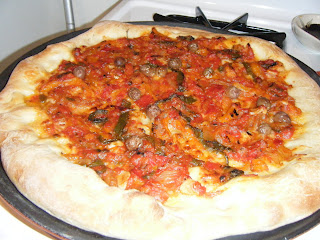 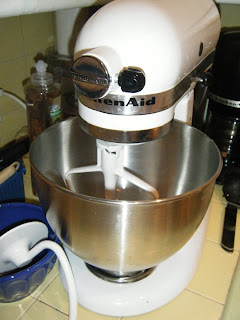 This recipe begins with a pipérade. It’s a not so distant cousin of ratatouille. It contains at least two types of peppers, flame roasted and peeled, seeded and sautéed with sliced onion and garlic in olive oil with a couple of pinches of Spanish pimenton.

You will also need pizza dough, which is easy to make at home and which also freezes well. Or perhaps purchase some from a pizzeria nearby. Other ingredients are good melting cheese and some Spanish olives.

For the pipérade roast peppers over an oven burner. Choose a combination of colors, with at least one green type. As I’ve noted before, I prefer pasilla and poblano peppers to green bell peppers. The roasted skin peels off more easily, and they are easy to peel, seed and scrape. And I think they deliver a richer flavor.

Once you’ve roasted the peppers place them in a paper bag and roll closed. Or put them in a large bowl and cover it tightly with cling wrap. They’ll need about 20 minutes to rest before they are ready. To continue your mise slice a sweet onion as thinly as you can. Thinly slice two garlic cloves. Coarsely chop a couple of nice tomatoes.

Heat some olive oil to the point that it shimmers and add the peppers, onion, tomatoes and garlic and begin to sweat them down. Season with sea salt and the pimenton . The onions should be caramelized and soft and the tomatoes almost melted.

At this point your pipérade is ready to use at once or to hold for several days.

For the pizza, roll out your dough and shape in a pan. Cover with a towel to allow a second rise (the second after its first fermenting rise).

Crank up your oven to its highest temp. I’ve found through the use of a laser thermometer that the floor of mine attains about 600°F.

Meanwhile thinly slice your pizza cheese. For this I use a Basque Idiazabal, and I use a swivel peeler to get almost paper thin slices. Brush the bottom of the dough with olive oil and then cover with the cheese. Top that with your pipérade and brush the edges of the crust with more oil. Top with a handful of olives and place on the middle rack of your oven. Depending on the heat and your dough it should take about 18 minutes to finish. Let cool and then slice.
Posted by Pierino at 6:23 PM No comments: 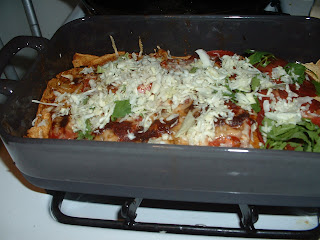 This casserole combines Mexican and Spanish elements in total, harmonious deliciousity. You will need a 14 oz can of red enchilada sauce (unless you make your own moles), a package of fideo noodles (sold in coils), 8 to 10 medium sized corn tortillas, ¾ lb ripe tomatoes, a firm sheep’s milk cheese---one which you like and which you can grate , approximately ¼ of one small head of green cabbage, cilantro washed and chopped (optional).

Begin by heating your oven to 400˚. Meanwhile bring a pot of water to boil on the stove top and lubricate your casserole with oil or butter.

Recipes for publication these days are supposed to remind you to open the can before using the contents, so please do that, right? Empty the enchilada sauce into a large bowl. Using a box grater, grate your cheese. You will need about 4 oz or more to your taste. Dice one tomato but leave at least one whole to slice.

When the water has come to a boil add coarse salt and then the fideo coils. Cook until just barely al dente. Drain the noodles and when cool enough to handle separate into strands. One by one dip a corn tortilla into your patient enchilada sauce---it’s waiting for your loving touch. Cup a tortilla in the palm of your hand, and using your non-wet hand spoon in some grated cheese, then pluck out some fideo to almost fill the tortilla add some chopped tomato and roll up to fit one side of your casserole. Repeat until the casserole is full with just one layer of enchiladas. Drip any remaining enchilada sauce over the top, followed by another handful of cheese. As fast as Zorro you must now slice your tomatoes and place these on top of everything else. Place the casserole in the hot oven.

Now grate your cabbage on the box grater which you have not yet put in the dishwasher. After about 20 minutes your enchiladas should be ready. And yes, your earthenware casserole will be hot to handle. Toss some cilantro over the top, if using, followed by the grated cabbage. For enchiladas Cal-Mex style top with sour cream----I’m not saying you should, just that you can.
Posted by Pierino at 5:38 PM No comments: 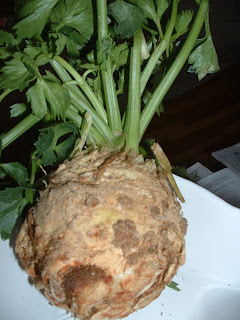 This woodland creature is commonly known as:

a) Tom Hanks's pal in "Cast Away"
b) Celeriac
c) Shrekfruit
d) Alton Brown
e) Glutenintolerantosaurus
Posted by Pierino at 9:20 AM No comments: