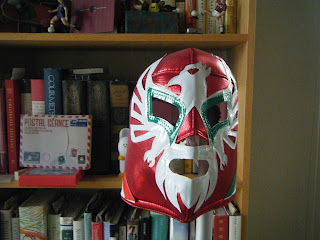 I recently had the great pleasure of sharing lunch with Gustavo Arellano, editor of the OC Weekly who is also the author of two fine books, !ASK A MEXICAN! and TACO USA: HOW MEXICAN FOOD CONQUERED AMERICA. His “Ask a Mexican” column is nationally syndicated thanks to Village Voice Media. This guy is one cool homeboy.
I wanted to meet up with Gustavo because I love his Swiftian sense of self parody---and I mean that as a serious compliment. In his own words to me, “You make an idiot of yourself to make a bigger point”. He does this unflinchingly well.
But apart from the cleverness of his “Ask” column I was impressed with the very serious scholarship that went into TACO USA. And that was the real reason I wanted to meet up with him in person. Unlike Rick Bayless, Gustavo doesn’t have “people”. I simply e-mailed a request for an interview and he answered back, “Sure”!
Gustavo chose the location, Taqueria Zamora in Santa Ana which turned out to be located only a mile from my hotel. It’s in a strip center which shouldn’t scare you away as most of the best ethnic foods in SoCal are located in store fronts like this.
I arrived at Taqueria Zamora a short while ahead of Gustavo. There are two rooms with almost no decor, the one in front being a bit noisy with a juke box and then there is a larger room in back which is more quiet. When I sat down a kid who was about 3’5” tall brought over chips, salsa and a plate of refried beans. Moments later Gustavo arrived and almost the first words out of his mouth were, “this salsa is great!”

Señor Arellano has his MA in Latin American Studies from UCLA but also a BA in film studies from Chapman University. This led to a short digression on to Richard Rodriguez and his unashamed genre films, e.g. “Machete” which both of us admire. As a grad student in American Studies at USC I was following the same scholarly trails in regard to the history of California and the Southwest, combing through the library stacks for primary sources. Gustavo did that same thing for TACO USA. His food scholarship is impeccable.

Back to the food part: when our orders came out Gustavo’s face lit up in something like the ecstasy of Saint Teresa, “THIS is real Mexican food.” His order was tacos asada with a jugo naranja (this guy is a cheap date!). I went with huarache (named for an article of footwear) with lengua. I seldom get to eat cow tongue this good. Over our meals we talked some more about Mexican food and its history in the US.

The burrito plays something of a central role in Cal-Mex cooking. It’s almost metaphorical for everything that’s great about this cuisine. The exact history of the burrito is as difficult to knock down as looking for Jimmy Hoffa. Did it arrive in the 1890’s? or the 1960’s? Certainly it was bracero food in between. For you, my fellow food historians, the menu at El Cholo (1923) in LA lists the dates when certain items entered their kitchen repertoire. While I’ve always associated the burrito with California and Arizona, Gustavo insists that you can get a good burrito in El Paso (a town which he inexplicably loves---hey, I’ve been there). The El Paso burrito is on the small side. No accounting for taste.

In TACO USA Mr. Arellano describes a fund raiser for the California Latino Journalists Association, where the key note speaker was Jonathan Gold who is the only food writer to ever win a Pulitzer. Apparently Gold really lit up Rick Bayless on the subject of “authentic” Mexican cooking in Southern California. As a dutiful journalist Arellano reported this on the OC Weekly blog. Bayless actually read it! But then he’s got people for that. Of course as a serious journalist, Gustavo, after a prickly reply from Señor Rick, tried to follow up and arrange an interview and was shunned like Helen Thomas at a White House press conference. That would be another case of “kill the messenger”.

When describing Mexican food in Los Estados Unidos (“so far from God”) Arellano doesn’t use words like “authentic”, rather he will say “real”. This recognizes the subtle distinctions and changes that occur when people cross borders but still try to keep it real. Cal-Mex is no less “real” than Tex-Mex, just different. “Real” is the sensibility that immigrants carry with them, not the recipe.

Gustavo described to me how things like tamales got bigger when they crossed the border. The same thing happened when Italians arrived on the East Coast. The meatball just got bigger and bigger and bigger. Welcome to “L’America…everything big in America”.

In his acknowledgment page for “Ask…” Gustavo throws a backhander at Orange County as “the most Mexican hating county in the country”. My reply was, “you know I have to disagree with that…”. He instantly said, “Maricopa” which was exactly what I was referring to; as in getting pulled over for driving while Hispanic in Arizona. Gustavo immediately cited the number of the Senate bill, SB1070, which of course was tossed out by the courts. This, after it did huge financial damage to Phoenix in lost convention business and local taxes paid by Latino owned shops in towns like Mesa and Gilbert because everyone ran and hid. Stupid. This is a state which passed a bill establishing the chimichanga (a deep fried burrito) as the official state food. Apparently these so-called lawmakers have a lot of time on their hands.

Gustavo Arellano’s father managed to get past “la migra” and entered the country illegally. G wears that like a chip on his shoulder. He writes affectionately about his mother’s meticulous preparation of menudo, using all four stomachs of your favorite ruminant. My own grandfather was illegal Irish, ran a speakeasy in New York. Unfortunately the Irish haven’t contributed much foodwise although we do make great bartenders. I would love to taste Gustavo’s Mami’s menudo.

If you would like to reenact my lunch with A Mexican go to: http://www.taqueriazamora.net/

And for the more scholarly among you Señor Arellano still occasionally teaches Chicano Studies at Cal State Fullerton. If you enroll now I think you get a sofa for your front yard. Otherwise just read his books which are damn fine, even if for some reason he loves El Paso.