Chicken a la Plancha for a Summer Night 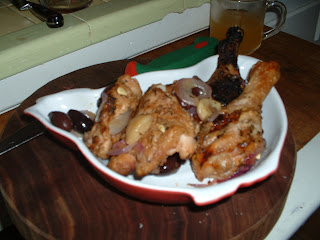 To finish and serve, you will need thinly sliced red onion and two or more peeled cloves of garlic (preferably from confit) , a handful of small olives, one meyer lemon and ground black pepper.

Begin by building a fire of hardwood charcoal. I recommend banking the coals to one side and placing a drip pan to one side at the bottom of the grill because to the extent possible you would like to cook the chicken over indirect heat. Position any fatty pieces so that they drip into the pan and not onto the coals. Begin skin side down and finish skin side up. Place a few rosemary and lavender branches (if using) on the grill grate amidst the chicken pieces so that they help perfume the skin and meat. Discard the herb branches which by now will be blackened.

While the chicken is cooking sauté the onions in a small amount of olive oil. Allow them to soften just short of full carmelization and add the garlic cloves and stir. When the chicken is finished transfer the pieces to a serving platter. Add a generous grating of black pepper. Top with sautéed onions and garlic. Squeeze the juice of the lemon over the chicken and scatter the olives.

Serve with a green salad, and maybe some couscous.
Posted by Pierino at 11:51 AM No comments: 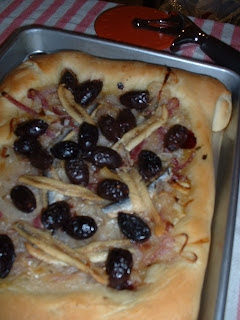 Allez cuisine! One more reason for you to master flat breads that you can top or fill with really swell stuff.

You will need 1 ½ lb pre-made dough, such as pizza dough. This dough freezes well and is handy to keeper in the freezer, tightly wrapped in plastic. Sweet onions, thinly sliced. Two or more peeled cloves of garlic. Eight to twelve good quality anchovies such as boquerones or alici. Black olives (pitted or not) such as niçoise . “Fruity” extra virgin olive oil. A sprig of fresh thyme, and a bay leaf. Bench flour. Sea salt and pepper.

If using a frozen dough allow it to come back to room temperature while still in its cling wrap.

Heat some olive oil in a pan large enough to contain the onions and slowly carmelize them, stirring frequently. This will take about 40 minutes over a low flame. You would use this technique when making onion soup.

Unwrap the dough and roll it out onto a floured board. Transfer the dough to a sheet pan you’ve rubbed with olive oil. Crimp the dough against the edges of the pan so that it will hold the filling. You would like the interior to be about 1/8” thick.

Cover the rolled out crust in the pan with a towel and allow it to rest for about fifteen minutes.

Fill the crust with a lavish amount of onions and the garlic cloves. Tuck in the bay leaf. Arrange the anchovies in a cris cross pattern. Scatter the olives across the top. Strip off the leaves from the thyme and sprinkle those around. Season with sea salt and pepper.

Brush the outside crust lightly with a little olive oil and bake in the oven for about 20 minutes or until the outside crust becomes nice and golden brown. Serve sliced.
Posted by Pierino at 10:43 AM 1 comment:

When not chasing after the Kogi truck Pierino is ever on the hunt for pupusas. Pupusas are native to El Salavador. They could be described as living a life somewhere between a soft corn taco and an empanada. The dough itself is made from masa and water and the interior filling is a mozzarella like cheese, and chicken or beef or pork or vegetables. The essential condiments include spicy cabbage slaw and some zesty salsa.
Here's a quick look from our spy cam of pupusas in progress at or local farmer's market.

Mary Sue Milliken of the "Two Hot Tamales" is also a fan and raves about the pupusas from the Central Market in downtown LA.
Posted by Pierino at 11:13 AM No comments:

Of late Pierino has been dividing his time on the ol' pie chart amidst trips to farmers markets and Surfas in Culver City. This makes for a busy but satisfying week: fresh produce from the markets and tools and prepared products from Surfas.


At the Friday Hermosa Beach market we stopped at Harry's Berries out of Oxnard and talked to Gabriel about strawberries.


The berries we purchased were small very sweet, and actually for all intents "organic" but for the fact that they are not certified as such. This is a very slippery slope for small growers and confusing as hell for the consumer. "Certified" is the operative word and there is an "economy of scale" trade off that confronts small farmers, particularly in terms of paperwork.

Pierino talked to Russ Parsons of the LA Times about this back when berries just beginning to show up in the markets. In an e-mail Russ wrote: "...until the advent of chemical pesticides, [strawberries] were a miniscule crop because they are so susceptible to soil-borne diseases that you couldn’t plant them in the same field more than two years in a row. Probably the worst pesticide that is used on strawberries is the same one that is used to fumigate houses for termite control. It’s applied to the soil before planting to knock down the virus load. It is very nasty and it is one of those that for me becomes a very difficult question of whether it’s worth it or not. On the other hand, there are few things more delicious than a great strawberry."

You can listen to Russ Parsons discuss this topic with Evan Kleiman on the podcast of Saturday's (8/15)"Good Food." KCRW.

So, when you can, patronize your farmers markets and talk to the growers. They are happy to answer your questions.

For Harry's Berries go to www.harrysberries.com

And if you don't live in Southern California you can shop Surfas at www.surfasonline.com
Posted by Pierino at 2:47 PM No comments: