The Passenger in Chelsea 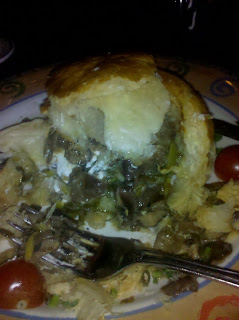 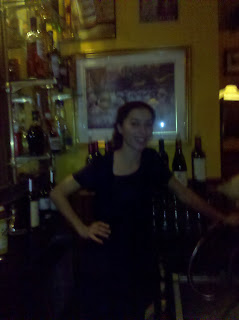 Tree lighting week in Manhattan. A week we would avoid if we didn't have to visit there for work. Pierino has booked a nice hotel room down in Chelsea for four nights. Our flight is delayed by an hour and half. However our bag is wheeled out first with a thank you note from TSA inside. Then we are whisked into Manhattan by a driver from Coughingstan. Must be why we came home sick.

Midnight arrival at our corner, 8th Avenue and 22nd. The sign reads GEM Hotel except that it's anchored above a vacant retail space. Fortunately the hotel itself was actually one door away on 22nd. Boutique hotel room in the "Ascend" collection. You don't ascend very far because it's only five stories. Our small room with European style fittings has a view of the Empire State Building with the Hanukkah lights on.

Sunday we sleep. Meet a colleague for lunch at Katz's Deli for Matzoh Ball soup. By evening it's beginning to get really cold. So around 5:00 Pierino heads out the door toward a restaurant over on 7th Avenue. But on the chilly walk he notices a small restuarant at the corner of 8th and 20th, Le Trois Canards which sounds vaguely familiar. It was familiar because it had recently moved to this location from a few blocks away, one in which we had dropped in before way back when. We figured we'd check out the menu. Unfortunately the door was locked. But suddenly we were admitted by the lovely Samira who it turns out would be working all stations including the bar in the tiny dining room. As usual we order a glass of wine at the bar and see that the menu is perfect for a cold, winter night. Forget 7th Avenue!

First course, steaming garlicky escargots in their own natural shells so that you have to use those clamp thingies to pry them out. This was followed by a delicious tarte au cepes, spilling out good stuff including escarole. Pierino is a happy man especially after chatting with Samira, international woman of mystery. Before we leave Samira smuggles some extra biscotti out of the kitchen, which he sticks in his pockets along with the remaining half bottle of sparkling water. Unfortunately (not so really unfortunate, in the end), at about 2:00 a.m. Pierino wakes up realizing that he has left his bag hanging on the back of his chair. And he has an early train to White Plains in the morning.

So, after an 8:00 a.m. to 9:00 p.m. schedule of trains and meetings we go back to Le Trois Canards to retrieve our stuff. Once again greeted at the door by Samira. So we hang out for another glass of wine until they are ready to lock the doors. We discuss the films of Pontecorvo (The Battle of Algiers)and Fellini (La Dolce Vita)and then adieu.

And it's still stinking cold.

On our last night in Manhattan where else would we go? Doh! Back to Trois Canards. It's only two blocks away. This time we ordered their superb Onion Soup Gratinee. Now that will warm your bones when it's 18F outside. Au revoir Samira. Until the next visit.
Posted by Pierino at 9:41 AM No comments:

I am the Passenger

And I meet interesting people in train stations and airport lounges and most often restaurant bars where I arrive by my ownself with a book. Over four days in New York I met a choral student from Beijing, two antique dealers, and a beautiful restaurant server with a fascinating personal history: Moroccan/Algerian; grew up in Alsace. Her Moroccan father was recruited into the French Army and covertly assisted the Algerian rebels and had to sneak out of Algeria in 1962, escaped to France and raised his family. Meanwhile, observed in flight; a middle-aged Indian woman in an opposite seat playing a video game on an IPad which seemed to involve shooting down birds flying past, as well as blowing up buildings. I don't make this stuff up
Posted by Pierino at 1:10 PM No comments: