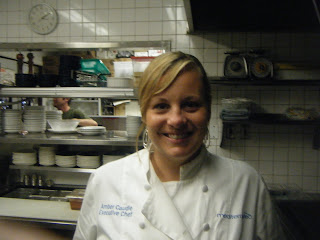 We are still a devoted locavore (no matter where we happen to be). Pierino has been patronizing Mediterraneo in Hermosa Beach since it opened. From the name you can infer a Mediterranean theme. Chef Amber has been in charge of the kitchen for six years and she is case study in what young women chefs have to do to succeed. Her food and her talents have grown incredibly in the time we have known her.

As Chef Amber tells the story, she had no formal culinary training (like say, from one of the Cordon Bleu schools) but developed her love of the art and craft as a child cooking with her family. Her first opportunity to enter a restaurant kitchen took place in Colorado where she was allowed by the Sicilian chef to do nothing but prep. Nevertheless, she was invited to follow him to the new Mediterraneo in California. Not long after it opened, the chef and the owner parted ways. Suddenly Amber was in charge of the Med's kitchen. We can tell you from our conversations that Chef Amber is a very serious student of cooking and does practically nothing but study and cook. At first her menu of necessity had to conform to the one the exiting chef had left behind. For the most part it is tapas as in small plates with some entrees. Gradually Amber made it all her own.

Our chef has a fascination with Spanish items, even though two years ago she did a stage in Sorrento in a B&B. She is a devotee of the Slow Food Movement too. Of late she's done some freshening up to the tapas plates, which frankly we love. These were hard to sell at first, stuff like Spanish white anchovies (boquerones) and morcilla (blood sausage)but now they are a success. There are occasional specials not on the menu, but just ask to find out what they might be. We can say that on two occasions for small tables of Pierino's friends, Chef wowed everyone with off the menu dinners at a very reasonable price. This should also tell you that we are a big supporter of what Amber is trying to accomplish here. Think "Top Chef" qualifiers.

Recommendatons from the nightly tapas menu (cold and hot):

Hot: our favorites include;

And don't overlook the cheese plates!

So go out and support young chefs who work hard for you!

*Chef Amber has an ingenious method for preparing her tortilla
Posted by Pierino at 3:24 PM No comments: 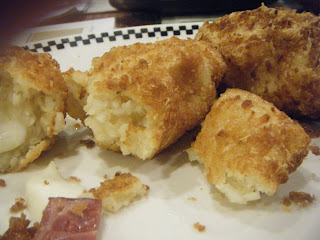 Suppli al telefono is classic Roman street food. “Telefono” refers to telephone wires. When you bite into one of these gooey croquettes the strings of melted mozzarella are the wires. We think the origins of this dish must be in Sicily where its counterparts would be the “arancine.” Lots of good ideas came to Rome from Sicily when the Jews were expelled during the Inquisition; most of the culinary ones involved frying stuff. My version isn’t kosher but you can make it so quite easily. The rice is the star here, tweak it as you will. Don’t even think about attempting this with long grain rice. You begin by making a risotto which you can do a day ahead. You can even use leftover “sticky rice” of the cal-rose variety or Spanish “bomba.”
Ingredients:
1 cup Arborio (or other short grain) rice
1 tbs butter
¼ cup chopped red onion
2 cups chicken stock
1 pinch saffron threads
3 whole eggs (2 for the rice plus one for your frying station)
1/3 cup grated pecorino cheese
¼ pound prosciutto or speck or spicy capacola (have it sliced thick), cut into ¼ inch dice
5 oz low moisture mozzarella
½ cup bread crumbs (panko)
½ cup all purpose flour
3 cups frying oil (olive oil would be Roman, but you can use canola or peanut oil as well)

Salt and pepper
1) Prepare the rice. Bring your chicken stock to a boil, add the saffron threads and lower heat to a simmer. Meanwhile melt the butter in your rice pan and add the onion. Allow the onion to color
2) Stir the rice into the butter with a wooden spoon. Continue to stir until the rice is translucent.
3) Over medium heat add stock to rice and onion a ladleful at a time. Allow 25 minutes for rice to become al dente and remove from heat.
4) Turn your rice out into a large bowl and allow to cool. Beat two eggs and add them to the rice with several spoons of pecorino, plus salt and pepper. Using your clean hands squish everything together into a lumpen proletariat like mass.
5) In a large pot, preferably cast iron, enameled or not, heat frying oil to 370 degrees.
6) Again using your clean hands, shape the rice into egg shaped balls and insert a piece a chunk of mozzarella and a chunk of your preferred hammage. Close the ball tightly.
7) Your frying station consists of a plate of flour, the remaining egg (also beaten) in a bowl, and a final plate of bread crumbs mixed with more pecorino.
8) One by one, roll the suppli into flour first, dip into egg and finally roll in bread crumbs.
9) Carefully lower your suppli into your hot cooking oil. If you displace too much oil you won’t be yelling “Eureka” like Archimedes. You’ll be dialing 911. Allow your suppli to get nice and golden brown. Serve hot but with care.

Note to cook. There are many variations for suppli and they remain open to argument. Welcome to Rome. Among my favorites would be a ragu of regaglie (chicken giblets), which you could substitute for ham.
Posted by Pierino at 12:48 PM No comments:

Twilight, the dinner not the stupid movie 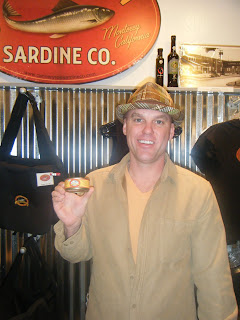 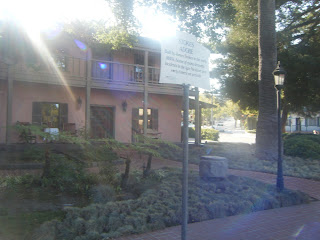 Pierino has spent an indecent amount of time crashing the Central Coast on his way to and from....points north and south. On our return trip from Hercules/Pinole we spent 20 hours in Monterey (we love Monterey) and after a long drive from East Bay landed ourselves at Stokes. This was fortuitous. Because Stokes has now closed. Shock, horror, awe, grief. New chef, but not his fault. We really liked the frogs legs. Bones were frenched so that you had nice toothy morsels of flesh like a lollypop on a little stick of amphibian tibia. The "Buffalo Sweetbreads" were flat out wierd, but they did taste good. Alas, folks this is Twilight for fine dining in Monterey. We'll miss restaurant bartenders Mario and Dino---but they'll turn up someplace soon. And the original chef Brandon Miller is cooking it up in Carmel.

At our hotel we picked up a copy of the free newspaper "Monterey Weekly" and as a consequence had a quick morning confab with Daren Warnick, the brains behind "Cannery Row, Sardine Co." Do you like sardines? Pierino love sardines. Pierino loves fish in tins. Daren got some timely press that pretty much wiped out his inventory almost over night, and it took him a little time to restock it. Price of success. But he has a good product carrying on the heritage of Steinbeck Country and you should go visit him at 700 Cannery Row.
Posted by Pierino at 3:21 PM No comments:

Foodbuzz, Dawn of the Eggs

After a rapturous dining experience at the "Outstanding in the Field" dinner Pierino quickly retired to his chambers at the Galleria Park. He woke up at 5:00 a.m. and discovered that there really was hot coffee on the mezzanine level. So back up four flights of stairs with newspapers. Hooked up with a pair of our favorite bloggers and walked down to Lulu for the sendoff brunch. The DIY SKYY bloody mary bar was pretty scary. We consumed two, along with Nature's Pride croque monsieur and of course...eggs, scrambled not stirred. Neat, sweet, petite.

Posted by Pierino at 5:11 PM No comments:

Saturday evening we walked into a Fellini film. Very much like "8 1/2". We could almost hear the Nino Rota "la passarella" score playing in our head down at Greenleaf Produce (or was it Cine Citta?) for the "Outstanding in the Field Dinner". Like Marcello Mastroianni in that film we wanted to crawl beneath the miles of tables arranged like a maze, passing fork lifts, produce boxes and loading docks. Really, it was like the final scene of that movie---one of our all time faves. Thank God it didn't turn into "The Cook, the Thief...."!

The menu was astonishing!

Tell me if any of this looks familiar, http://www.youtube.com/watch?v=OtDQOF_pU8A
Posted by Pierino at 6:23 PM No comments:

Slouching through San Francisco, Pierino arrived back at the Hotel Vitale for an outstanding Olive Oil clinic led by Chef Michael Touhy of The Grange in Sacramento. We tasted and discussed six different oils and left the session with yet another Foodbuzz gift, a very nice bottle of Olio Nuovo for our own kitchen.

Chef Michael did a wonderful job and all the bloggers who attended raved about it. After that it was a hike down to the Metreon in the excellent company of bloggers Lisa and Jin. City View's space was indeed that! The Taste Pavillion featured more than 50 producers. We sampled everything from crostini to olives to a variety of wines and cheeses---some items just being introduced to the market.

On our last spin through the aisles we unexpectedly ran into an old cohort, Sean Breheny, now at Earthbound Farm in San Juan Bautista. We remember Sean from back when he worked at the Monterey Bay Aquarium. In those days Pierino was a vendor and Sean would give us a free walk through of the latest exhibits. What a great guy.

After making our way back to our hotel we rushed across the street to ship our swag bag supplies home. Thank you FedEx! After resting up we took the street car back toward the Vitale. Pierino is a major fan of the San Francisco street cars and never tires of riding them. On the way to the Vitale we a made quick visit to the San Francisco Railway Museum and snagged some souvenirs. The gift shop is close to the Ferry Building and only a block from the Vitale. Check out www.streetcar.org More to follow

Posted by Pierino at 3:01 PM No comments:

We arrived in San Francisco late Friday for the Foodbuzz blogger conference. In the evening we gathered on the 8th floor terrace of the lovely St. Vitale Hotel overlooking the Ferry Building and the Bay Bridge. Superb food and beverage was served, but Pierino exhausted from his long day sipped club soda while his colleagues consumed champagne and exotic drinks. We regret having missed the Street Food Fair. But alas, an early night in bed called to us.

Posted by Pierino at 9:01 AM No comments: