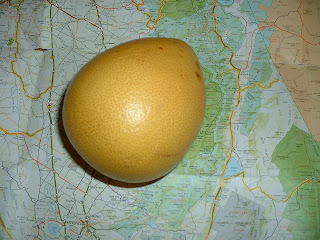 Pierino loves grapefruit (pompelmo in Italiano). We found these lovely pear shaped Shaddocks at Grow in Manhattan Beach. They require a little work. You will need a sharp knife because takeing off the rind is like skinning a basketball. And the pips are kind of big too---like the size of your canine teeth.

But once you are in there the fruit is delicious. Perfect combination of bitter and sweet. If you don't adore that then don't eat grapefruit. Ever.
Posted by Pierino at 9:23 AM No comments:

Give him some air...

Keller (yes, that Keller) is back with a new book from Artisan, UNDER PRESSURE which lands on your coffee table for $50. Pierino's take is that this is like the Simpsons meet the Jetsons.

Keller acknowledges that his book is meant for chefs. Who at home has an "immersion circulator" with a connoculater bypass? Keller predicts that these will become as common as microwaves. Of course some of the most conspicuous meltdowns on "Top Chef" had to do with cooking 'sous vide'. It's like the old Stouffer's boil in a bag swedish meatballs. Zio Pasquino would never think of boiling meatballs. Matzoh's maybe.

Pierino is still trying to catch up with the epoch of molecular gastronomy. We have yet to make our first foam (espuma) but it could happen soon. We've been working on menus that are a tribute to Spain, the epicenter of cooking genius at the moment. We actually own a Ferran Adria baseball card. So far neither Ferran nor Keller have promoted a "salad shooter."
Posted by Pierino at 7:45 AM No comments:

Our Breakfast with Pedro O'Brien 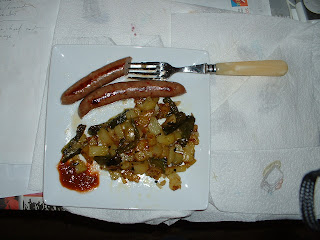 Pierino aka The Recessionist,always a problem child with a criminal mind, has been pursuing a back to basics; low cost ingredients; and a "buy what's good in your markets now", agenda. And we are serious proclaimers.

Here is our latest:

This dish is quick to make and the clean up is easy. Simply, fire roast the peppers over a gas burner until the skin blackens and then allow them to steam themselves to contentment in a paper bag. The rest of the prep is fast.

One essential tool is a cast iron pan. The other is the brown paper bag.

Turn on a gas burner to a medium flame. Using tongs place the pepper directly on the burner. If you are nimble you can do two at one time. The skin should blacken nicely but be sure to turn on your fan or otherwise at some point you will set off your smoke alarm. Place the finished peppers in the bag and roll the top closed. Now go to work on your prep.

Chop the onion and set aside. Peel the potatoes. It’s okay to leave a bit of skin on for color and flavor. Dice the potatoes. If you have a blonde standing nearby have her blow on the dice for luck.

Once the peppers are cool enough to handle remove them from the bag and rub off most of the skin. Again, it’s okay to leave some on. Cut off the stem end(s) and remove the seeds. Cut the pepper in half lengthwise and then slice the meat into strips. And if you have a stripper nearby…oh, never mind.

Heat up your cast iron skillet. Cover the bottom in olive oil and bring it to the point where it shimmers but doesn’t smoke. Now add the potatoes and begin to brown them up. After a minute or so add the chopped onions and allow those to get some color. Season with the salt and pepper. You will need to turn the mixture with a spatula from time to time. Once the potatoes begin to attain the al dente stage place a lid over the pan so that a little steaming action takes place. Don’t keep it on too long.Then check for texture and seasoning. When it tastes good, plate it up with a little hot sauce on the side.

Notes: We prefer pasilla peppers because they have a rich flavor without a lot of heat. For this dish they are much better than green bell peppers which take longer to blacken because they have a thicker skin and also a less complex flavor.
Other flavor options might be some chopped cilantro or chopped parsley.
Posted by Pierino at 10:25 AM No comments: