My Guilty Pleasures, chapter one 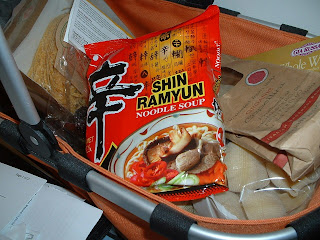 I love this stuff! It's the Korean version of ramen. It's spicy and will provide you with all the salt you need for a week. And these packages only cost me 94 cents. When I can find them.

This is the stuff you wish you had during your starving college student days.

Now as an adult (or at least as a crazy Irish kid pretending to be an adult) I like to add other ingredients such as thinly sliced bok choy or Nappa cabbage along with some rehydrated shitake mushrooms and chopped scallions. I buy my shitake's at a Japanese market.

The latter is the part that they didn't teach you in college. Add some vegetables to your ramen.

Posted by Pierino at 4:56 PM No comments:

Pierino spent this past weekend at the Horror Hilton in Anaheim attending a "celebrity" food show. The hotel is located adjacent to Disneyland and in the lobby of this cavernous place you can be trampled by a pack of kids who stand only about 3' tall. For me Disneyland is the "unhappiest place on earth." And as an evil prank I'm going to put this thought in your heads: "It's a small world afterall..." Now try and keep that tune out of your mind for 24 hours.

The show floor was mostly disappointing. I could walk it in about 15 minutes. However after a few passes I did meet some very nice people. I chatted with Nancy Ash of the California Olive Oil Council. California olive oils are one of my own causes.

The headliners were the crew from "Ace of Cakes", one of the only two good shows on the Food Network. Duff Goldman is like some rabalaisian character, owner of Charm City Cakes in Baltimore. His office manager Mary Alice was the one in control of their stage show. What surprised me was that taciturn Geoff apparently has a big following among fans of the show.

They do amazing stuff. Duff spent most of their hour on stage working and making wise cracks. But it wrapped up with him grabbing a hockey stick to slap cup cakes into the audience. He managed to hit his own mom.
Posted by Pierino at 8:52 AM No comments:

Unfortunately I've tumbled back into the Inferno from Purgatory. But I'm working my way back up. However these are some of the most beautiful lines ever written:

One of the most beautiful verses in all of literature, and I have it memorized. But you have to remember that Hell isn't hot. It's freezing cold!
-
Posted by Pierino at 11:59 AM No comments: 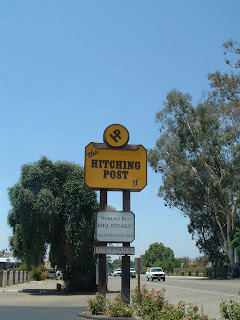 ...is wood grilled artichokes. I've been back out on the road a lot lately. Fairly recently I was up in the Santa Ynez Valley staying on the outskirts of Solvang. If you saw the film "Sideways" you will recognize the familiar yellow sign outside The Hitching Post II in Buelton.

Sideways mania has calmed down considerably. So, I did my usual thing and walked in with a book and found a seat at the bar (kind of like Miles and Jack).

Now, when you pull into the parking lot you'll immediately smell the oak wood fire going outside. Very Central Coast. When you order it might take some time, not because the service is bad but because what they cook there takes time. I always try to read, but then I always wind up in interesting conversations with smart people at the bar. Oh well, I'll read in my hotel room.

This time I ordered two small plates. A grilled quail (please forgive me) and an incredible grilled artichoke which really set the bar for me.

There is also a place close to where I live that does an excellent job: Salt Creek Grille in El Segundo. Now comes the wierd part; they only have four locations, two in New Jersey and two in California. When I come in I don't even have to order because the bartender is going to set down my drink and and send back a ticket for an artichoke. Still more wierd, he and I both grew up in the same small town, Babylon, Long Island. He even showed me his driver's license. I'm a scrappy little Irish f*** but Patrick is a big one. He's a guy I would want to have my back. So I'm glad to have him as a friend.

Oh, yes and their artichokes are great although they do them over a gas grill but season them with liquid smoke. This is what scrappy little Irish effing cooks do, make friends and ferret out critical information.

So now I'm cooking them myself. I'm doing okay I think, and with a couple of more practice sessions this summer I will have it down. And hopefully a recipe will go out in the not so distant future.
Posted by Pierino at 10:08 AM No comments: