March as I Left It 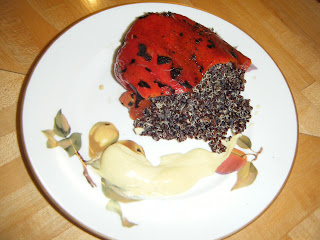 April is not the cruelest month, it's really March. Ask Caesar. We spent most of March traveling to places you don't want to visit. With a mouth full of rocks (Foreign Legion term)we set out for Arizona. Our trip was bookended by airports bearing the names of right wing icons; out of John Wayne into Barry Goldwater and back again.

Before departure left car with sister and had dinner at Lucca in Irvine which was actually really good. Armandino Batali salumi with La Quercia prosciutto. Lucca is located in a shopping center in Irvine. Given that Irvine has no real city center that's not surprising.

In the morning Pierino was off to AZ. Picked up a Nissan something or other from Hertz and drove straight to Tucson. Dinner at Sullivan's was not so bad. No complaints---yet. Late Monday it was back to Phoenix, the Vortex of Evil. We camped out in Chandler, a hotel in an office park with nothing but chain restaurants in the vicinity. So we set off to a restaurant which we've blogged before, Anise. To our shock and horror it was closed. Another victim of Maricopa County's bizarre politics. This state is populated by anti-immigrant know-nothings who control the state legislature. When they're not smashing their cars into each other they're passing laws establishing an official state gun!

During a week of seriously bad meals we enjoyed lunch with a very dear friend who owns a bookstore in Tempe. She'd spent the morning with a "legislator" pushing for the state to collect sales tax on on-line purchases. These libertarian chuckleheads don't get the fact that it might bring in $65million in revenue to a state with more than 14% unemployment and massive debt. Meanwhile the governor is spreading urban legends about headless bodies in the desert and their convention business has all but disappeared thanks to stupid anti-immigrant laws.

Pierino got serious sticker shock upon returning his Nissan Whatever. We had a decent weekly rate from Hertz but there was an additional 50% in taxes and surcharges on top of the base rate!! Checked with Hertz and only one of the charges was their's and it was fairly minimal. Everything else was Maricopa/Arizona surcharge and then tax on the surcharges. Why is the state losing tourists and conventions? Because they are IGNORANT HOE HANDLES that's why. And they balance it out with bigotry and patriotism.

Upon return to Los Angeles Pierino was able to meet his good friend Kim, author and editor, and escort her to dinner for her birthday weekend. Kim had the misfortune of spending her birthday in Anaheim for work reasons. Despite what the sign say's, it's not the happiest place on earth. So, off to AOC for appetizers and then an unbelievable dinner at Providence. Problem was both of us wanted to order the same things. There were two indecently delicious amuse-bouches course which we can barely begin to describe. One was a "Screwdriver Bubble" which looked like a raw egg. There's your molecular gastronomy in action. Kim and Pierino both chose the Chitarra Pasta with Sea Urchin which was heartstopping. And after, they brought out a little birthday offering for Kim. Michael Cimarusti of Providence is up for a Beard award for Best Chef, Pacific.

Barely up for air, we swam (almost literally) back south. Worst rain on Hwy 101 that we've seen in twelve years, at least. More cars smashing into each other or into inanimate objects. A sporty looking car that had zipped by us wound up crunched against the median a few miles ahead.

Closed the month with a visit to our tax guy. After that, we had to indulge in a couple of glasses of pastis and a meal cooked with friends. Our appetizer course turned out well; "The Red and the Black"(pictured). This was roasted red pepper stuffed with black quinoa and aioli as a condiment.