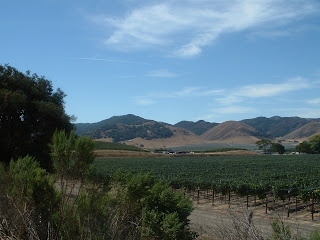 Just returned from one of Pierino's favorite car trips; Hwy 101 up to Paso Robles. Wonderful time of year to make the drive with yellow mustard exploding out of the hillsides along the highway. I brought along a couple of Yann Tiersen cds. His crazy waltzes really fit the mood.

I needed to hide away and get some work done in peace and quiet although at times I was feeling like the Martin Sheen character in Apocalypse Now.

As planned, I did have some really good meals. Paso (and the local pronunciation is Row-bulls) has two or three great restaurants but you quickly descend to "satisfactory." Still, this is a town I'd like to live in some day. I was hungry as hell when I rolled into town. My first stop was Villa Creek. I ordered at the bar and had their sausage, fruit and cheese plate. The sausage was house made and the cheese came from just down the road about 8 miles in Santa Margerita. Everything was terrific but the cheese, a sheep's milk cheese called Pomo Tome was outstanding. It tasted similar to a Basque Idizzabal but with very bright flavor.

The next morning I went to Raimondo in Paso to see if I could buy some of that cheese to take with me. They were a bit irked to learn that Villa Creek had it already when their order wasn't due for another week (at least). I then spoke with the kitchen at VC and they told me that they thought that they had bought up most of the production. I would say that's one more reason to buy local, and early.

Thursday evening in San Luis Obisbo (about 30 miles from Paso) brings to town the weekly farmers market. As I knew I would be cooking the next evening I bought some nice, small artichokes for I think, 4 for a dollar. Your local supermarket has chokes at about $4 each for globes... I guarantee those are going to be woody. Enzyte anyone?

While I was there I also picked up some Meyer lemons and young red onions.

After the market I went to a new restaurant in SLO named "Native." It's located on Chorro near the mission and the creek. Previously this spot was Mission Grill. But Native is so hip that they don't have a sign, just a chalkboard outside with the menu. The whole Feng Shui makeover look really works, taking full benefit of its great location. From the bar you can now look through the whole room down to the creek. I ordered their braised chicken lettuce cups which were excellent. But then...

...but then I went back to the menu and saw the dreaded term "slider" on there. Sliders are to the first decade of 2000 what napoleons were to the '90's. Anything that could be stacked could be and would be called a Napoleon. Hey, it's supposed to be an effing pastry! Sliders are reinvented White Castle burgers which go back to the 1940's and originally were called "Slyders" but sorry, no Rambo connection. Meaning I guess small things on small buns.

I think the chef at Native has many good ideas but next time I'm in SLO I'm going back to Novo.
Before leaving Paso Robles I stopped for lunch at the Crooked Kilt, a pub by the town square. I've wanted one of their T-shirts for awhile and I needed another garment because I hadn't packed smartly enough. When I looked at the menu there was a moment of serendipity. You can actually order a burger and a T for a single price; $25. As I only eat about five burgers per year this seemed like a good deal. And then I was on my way to Ojai.
Posted by Pierino at 11:08 AM No comments: