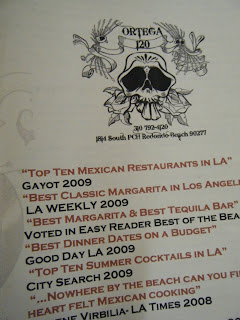 Sometimes I find good things by chance---it's maybe my restaurant radar.For about 25 years I lived in Hermosa Beach and the closest town to the south was Redondo. And for some weird reason I will always associate Redondo Beach with the Patti Smith song. Anyway, in a week of utter futility (not going into details) I was encamped in a hotel on PCH. First night of arrival I was absolutely dead tired and looking for a place to eat. Normally LA/CalMex bores the hell out of me but the closest place for anything was Ortega 120, a half block away. So, I entered and found this groovy restaurant bar and dining room decked out in post-punk and Mexican kitsch decor---you know, like skulls and stuff. As it turned out the food was really good. So good that I came back two nights later.

Apparently this restaurant is renowned for its tequila and margerita drinks, but as I drink neither I wouldn't know. But the food was damn good. On my first night I ordered carnitas enchiladas in a chile verde sauce. Two nights later I came back for the chile rellenos. Also really, really good. For some reason New York hasn't figured out Mexican yet, although Chicago has.

And here I have to ad lib that Arizona has made the chimichanga its official state food. If there is a more podunk state in the lower 48 I don't know which it could be. At least in the deep south they know how to cook. For the uninitiated, a chimichanga is basically a deep fried burrito.

On my final night in Redondo I crossed the border into Torrance in search of something Korean. The South Bay is blessed with wonderful Asian restaurants, most of which are located in strip centers, which never discourages me. So I found Yang San Park on Hawthorne Blvd and was in no way disappointed. I ordered a hearty kimchi pork stew, which of course came with six plates of other stuff. It was wonderful.

So if you are in the South Bay I'd give both of these places a nod.
Posted by Pierino at 3:14 PM No comments: