AZ: The Good, The Very Bad, and the Horribly Ugly 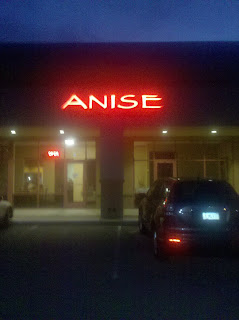 I try to find something good everywhere I travel. Usually I succeed. In this case, I was bunkered in Chandler, AZ and with a little research turned up Anise, a Vietnamese restaurant on Dobson. Located in a strip mall (yeah, please name a Vietnamese restaurant in the western US that isn't), they ought to be a destination for anyone (like Pierino) stuck down there. The food is great. The charming Kim and Anne work the front of the house and will even order for you if you ask their advice. We went with that plan on our second visit. They make lovely, clear broths, which I think is the toughest to get right. Combined with crab meat, well...

Not everything in AZ is so charming right now. I happened to be there on the day that the district court blocked most of SB 1070. Now, could I just say that immigrant labor is the backbone of the restaurant and hotel industry in the state as well as most of North America with the exception of Guam and the Palin Territories. These people risk death walking through the desert just to wash dishes, cook and change the sheets in your hotel room. And you want to keep 'em out? Tell me why!

I was listening to KJZZ (an NPR affiliate) at the time that the decision came down. This was a local show with AZ callers (please remember that these people don't know that you are supposed to stop for red lights). Of course they were all offended and predicted that this will lead to a Republican sweep in November. They could be right. But what these morons won't accept is that the most conservative Supreme Court in 40 years will uphold the distict and circuit court decisions. Including Chief Justice Roberts? And then, what's your come back?

I heard one woman caller on KJZZ say, "when was the last time you saw an American [aka white] teenager working at a McDonald's?" How about they're too effing lazy to apply! Do you really think that Effing Ronald McDonald discriminates against white American teens? Shit, they grew up on Happy Meals, but it doesn't mean they want to work there. But these same idiots are also opposed to raising the minimum wage. You can't have it both ways.

And now for the decidedly ugly. I checked out of my hotel and was en route to the airport thinking that I had missed, for once, what is an all too familiar sight on Arizona roadways. That would be the ghastly car crash. Well, I didn't have to travel very far on 10 North to see the signs that access to I17 was closed. When I got there I could see why: in the connector lane a pickup was flipped over with the cab crushed. This happened to be a rainy morning. There are worse things than missing your off ramp. But hey, people in AZ will risk death to do that. And their thing about red lights? It means "Stop" not "speed up!"
Posted by Pierino at 11:01 AM No comments: