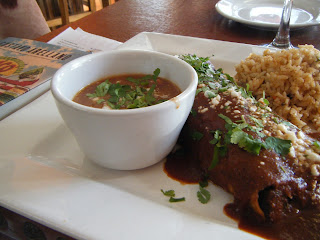 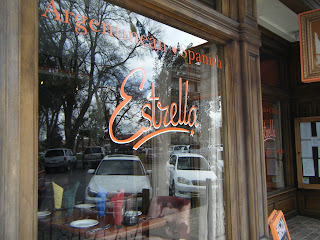 A couple of months ago I finished my work shift in Paso Robles at around 3:00 p.m. and strolled over to a local dining establishment to read a newspaper and have a "happy hour" glass of wine. So, I'm sitting at the bar and I look over at the two guys sitting next to me. Both have cooking influenced tattoos on their inside forearms. I can read these symbols like they are the Rosetta Stone.

Well, I had to ask, "Hey guys, I can see from your ink that you are cooks. Where do you work?" As it turned out they both work at Estrella in the downtown food and restaurant hub adjacent to the park. It happens to be my favorite lunch place in town. The guys turned out to be executive chef Ryan Swarthout and pastry chef Mike Learned (not present in the conversation, chef de cuisine Travis Borba).

Ryan described their cooking as "Latin American and Carribean", their ads say "Latin Riviera" and their shop window say's "Spanish Carribbean Argentine". I guess it depends on who you talk to and on what day. I just call it "mighty fine".


Since talking to the lads I've revisited a number of times, dragging friends along who described the food as "spot on".

Most of the menu reads "Mexico" to me. I especially love the "Cemita Poblano" sandwich. But then I'm a porkaholic. But I also really like the grilled scallop ceviche. If you are going for lunch you can figure that most items, tapas in particular, will run from $7.00 to $12.00.

They have a smallish bar with a great staff. The one problem is that to climb into the bar chairs you need an extenstion ladder. And to get out, you need a parachute. They are that high, and no bar rail. But that doesn't deter me, I just do my ninja rope trick.